The 17th conference of the International Association for Ladakh Studies (IALS) was held at the Tourist Facilitation Centre, Kargil from 26-29 July 2015. The conference was organised by IALS in collaboration with LAHDC, Kargil and J&K Academy of Art, Culture and Languages, Kargil. A total of around 90 scholars, scientists and students from different parts of the world registered for the conference and attended various sessions, demonstrating a great interest to learn and share knowledge. Fortysix papers, including 5 in Urdu, were presented and three documentary films were screened during the conference. The participants and presenters were of diverse background from within and outside Ladakh, including scholars from different universities. Unfortunately, some participants, including research students from Jammu University, could not make it to Kargil due to heavy rain fall and road blockage at Sonamarg.

The inaugural session took place at the Syed Mehdi Memorial Auditorium Hall Kargil on 26th July 2015. The Chairman of the J&K Legislative Council, Hajji Anayat Ali was the Chief Guest and Chief Executive Councilor LAHDC, Kargil, Hajji Hanifa Jan was the Guest of Honour for the inaugural session. This session started with a welcome speech by Gulzar Husain Munshi, the conference convener. This was followed by introductory speeches by IALS President John Bray and an insightful address from the keynote speaker, Prof. P. Stobdan, former Indian Ambassador. Executive Councillors, Syes Abass Razvi and Tsering Angdus were also present on the occasion.

The sessions on Climate Change and Water Management, Folk Art, Ethnography and Material Culture and Governance and political Change were successfully covered in three sessions on the first day. On the second day, there were sessions on Development, Religion and History, Agriculture and Heritage Conservation. Two documentary films were screened on the second day, including “In the Lap of the mountains: The Irrigation Systems of Ladakh’s Farming Communities” by Joe Hill and “Buddhist Art: a Fragile Inheritance” by Prof. David Park. The Biennial General Meeting of the Association took place after the final session. The conference dinner was held at Tourist Facilitation Centre on the same day.

Day Three included sessions on Folk Art, Ethnography and Material Culture (2), Art and Architecture, papers in Urdu, Biodiversity Conservation, Heritage Conservation (2), Contemporary Society and Contemporary History. The election results for the posts of President, Ladakh Liaison Officer and eight members in the advisory committee were also announced on the day three. Dr Sonam Wangchok was elected the president, Dr Konchok Paldan was elected as secretary uncontested and Tashi Morup was elected the Ladakh Liaison Officer. The elected members in the advisory committee include Tashi Ldawa Tsangspa, Kacho Mumtaz Khan, Dr Iqbal Ahmed, John Bray, Dr Amjad Ali, Dr Monisha Ahmed, Gulzar Husain Munshi and Tsewang Rigzin. The day ended with the screening of a documentary film “Hajira: The Story of a Woman Journalist in Ladakh” by Tashi Morup and Mabel Disket from LAMO, Leh. IALS is grateful to all presenters for ensuring that their papers were completed within the allotted time.

The conference would not have been possible without the support of LAHDC, Kargil, J&K Academy of Art, Culture and Languages, Kargil Development Authority, Tourism Department, Kargil and many individuals from Kargil, especially conference convenor Mr Gulzar Hussain Munshi and Deputy Secretary/Special Officer for Culture (Grade 1), Nazir Hussain and their team of volunteers. The Association is grateful to all the organisations and individuals who contributed to the success of the 17th IALS conference.

To end at personal note I am honoured to be the first Ladakhi to become the president of IALS in 35 years of the association. I take this as an opportunity more than a challenge to continue my aspirations for the success of the Association and look forward to working with executive and advisory committees and the larger membership of the Association. 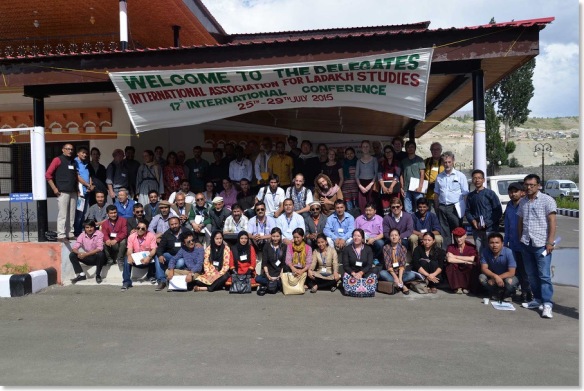